After 16 years under the leadership of chancellor Angela Merkel, Germany is set to vote for a new government on 26 September. Current polls predict a shift in majorities, most notably with a rise of the Green and Socialdemocratic Party. But regardless of what the final results look like, the next government will have to shape the country’s climate and health policy on its way to climate neutrality.

By Laura Jung, MD, MSc Public Health, Board member of the German Alliance on Climate Change and Health

The German climate movement has seen important wins this year, such as the German high court ruling in April acknowledging the rights of future generations and demanding that the government significantly strengthen its decarbonization plans. However, with the ongoing pandemic, climate was not a major topic of the early election campaigns. It changed when dramatic floods hit Germany in July, with devastating impacts costing the life of over 180 people. This brought climate change, and its increased risk of extreme weather events, back onto the election agenda.

There is no time to waste. While civil society demands that climate policies become  a priority for the incoming government, urging policy makers to act according to the Paris agreement´s 1.5C degree goal, it is predicted that Germany will widely miss its own climate targets this year. 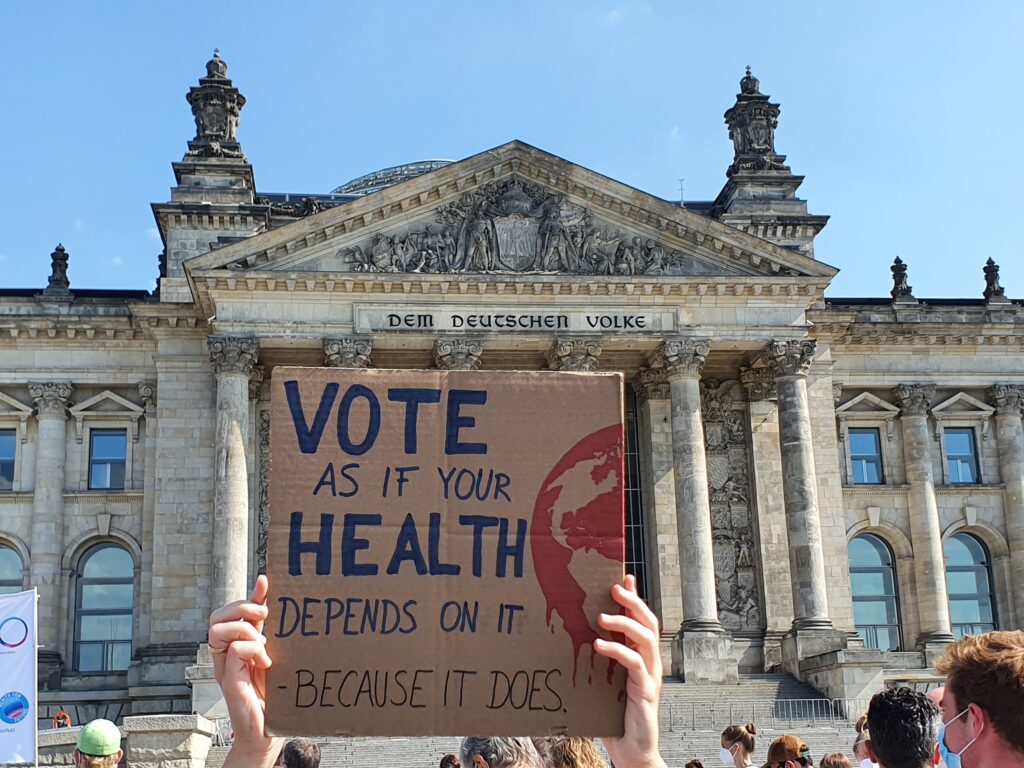 For the first time, health professionals, organised within the German Alliance on Climate Change and Health and Health for Future, have streamlined efforts to inform the vote from a health and climate perspective. Many are frustrated by the inaction of the current government and call for a drastic change of the country’s climate policies.

In their position paper “Your climate. Your health. Your choice.”  launched in June 2021, they asked political parties to acknowledge climate change as a medical emergency and  shared eight demands for a healthy future. These include an earlier phase out of coal energy (currently set at 2038), facilitation of active transport, innovative solutions for healthy cities, regulatory frameworks for sustainable diets and a climate-neutral health sector. Lastly, a framework for climate and health justice seeks to protect vulnerable groups from the increasing climate change impacts.

Health for Future also strives to encourage better communication between citizens and politicians. As part of their election campaign advocacy, they offered advocacy and communication workshops to their members. There are over 60 Health for Future groups all around Germany and they organised talks with local politicians and candidates, setting the agenda for climate and health. This initiative was a success and included, besides over 100 local talks, bigger events like an online panel discussion with the main party’s health experts, and events with Anna-Lena Baerbock and Olaf Scholz, the lead candidates of the Green party and the Social Democrats respectively.

That’s not all. The last weeks before elections are also the final sprint for the climate and health campaign. On September 10th, a broad alliance of health professionals joined a protest march from Charité Berlin to the governmental buildings to hand over a ‘medical prescription’ for climate action. Participants from all over the country showed up for the event, which included calls to action by Luisa Neubauer (lead of Fridays for Future Germany) and Prof. Sabine Gabrysch (Germany’s first professor for climate change and health). Nurses and doctors explained how heat and extreme weather events negatively affect their working conditions, while patient numbers are on the rise. Factors which can aggravate the already existing lack of trained nursing staff in Germany and risk patients’ safety. “We don’t see  a crisis of the climate, but rather a crisis of humanity”, said  Neubauer, whose mother also works as a nurse.

Scaling up Germany´s rather low climate targets was also on the mind of the protesters when they asked politicians ”Who will save 150,000 lives?”. This number, estimated by a recent Lancet Planetary Health modelling study, refers to the annual number of future deaths in Germany which could be avoided by ambitious climate policies in line with the 1.5C degree target.

In the days following the Berlin event, Health for Future groups in over 25 cities all over Germany organized vigils to remind politicians of their responsibility to protect our health through effective and ambitious climate policy. On September 24, Health for Future will join Fridays for Future and the global climate justice movement in this year’s global climate strike – just two days  before the federal elections in Germany.

A new era for climate and health in Germany?

The race for the German Chancellery is unpredictable at the moment, but more than ever before climate change is on the mind of politicians and voters. Parties offer quite different positions on energy and climate policies, ranging from continuation of the current path to a whole transformation of the sector. However, in the opinion of leading activists, none of the suggestions on the table is ambitious enough. It looks like the climate and health movement is here for the long haul, and campaigns will not end on election day. But hopes are high that after a pandemic, heatwaves and historic floods, planetary health will become a guiding principle for the incoming government. After all, who really wants to be responsible for 150 000 deaths?