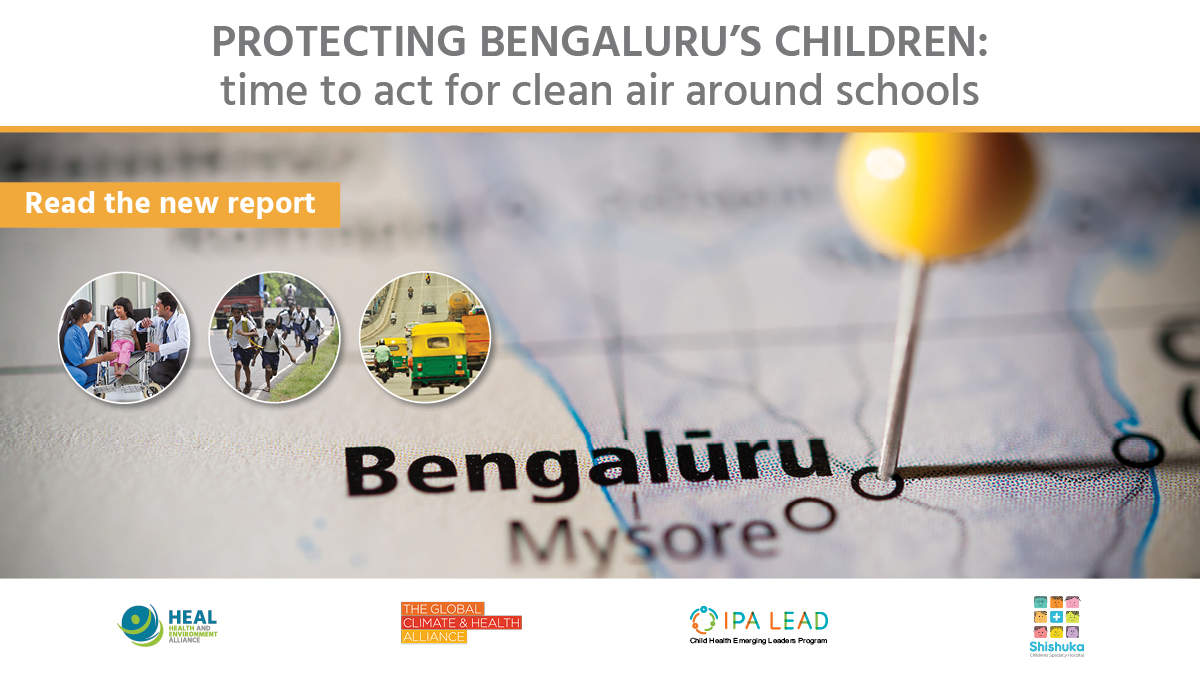 Bengaluru, 22 April, 2021:- Up to two million schoolchildren (20 lakhs) in Bengaluru, India are potentially exposed to dangerous air pollution during their school day, risking asthma, allergic rhinitis and other chronic health impacts, according to a report released today by Healthy Air Coalition, Bengaluru.

The report, Protecting Bengaluru’s Children: Time To Act For Clean Air Around Schools, examined air quality data recorded in the vicinity of 270 schools for 14 months, finding that 70,000 children attending these schools are breathing polluted air all year round, with particularly poor air quality during the seven months of October to April, as well during school departure times throughout the year.

Across Bengaluru, there are an estimated two million school-aged children between five and nineteen [1]. Given that the schools contained in the report, which are located throughout city major areas, had health-harming pollution, potentially all of Bengaluru’s schoolchildren are exposed to air pollution levels above WHO recommended concentrations.

“Unless urgent action is taken by government agencies and the Chief Secretary of Karnataka to swiftly reduce air pollution in Bengaluru, we will be dealing with a significantly greater health burden in the future”.

Children are particularly vulnerable to the health impacts of air pollution as they breathe in higher concentrations of pollutants and as their bodies are still developing, amongst other reasons. Effects of poor air quality can be acute especially for children with chronic conditions like asthma, but are also long-term, impacting a child’s lungs, heart, brain and nervous system, and increasing their risk for diseases that can manifest decades later.

The study used data from an independent monitoring network set up in 27 major locations in 18 districts of Bengaluru by the Healthy Air Coalition, including at some of the city’s busiest roads, including Brigade Road – one of the city’s key shopping districts – and at Jayachamarajendra Road (aka JC Road) site of the city’s town hall, and Corporation Circle. The study also looked at Bengaluru’s tech hub Electronic City, as well as the highly congested Bannerghatta Road.

The monitors are calibrated on an ongoing basis with one monitor co-located with an official, regulatory monitor. Data were recorded in real-time on a continuous basis, 24 hours a day, between June 2019 – July 2020.

Given that Bengaluru experienced a lockdown due to the covid-19 pandemic, with a consequent 28% drop in pollution, the results are likely to be an underestimate [2].

In comparison, the average concentrations in Bengaluru during June 2019 – July 2020 reached 40.7 ug/m3, well above the annual WHO guidelines and US EPA standards, and slightly above the Indian clean air standard. Between the months October to April, air quality was particularly poor (above daily EPA standard), and for December 2019 and January 2020, the PM values were even above the Indian daily national clean air standard..

“As a city of high popularity with major growth and as India’s IT capital, Bengaluru holds great potential to pave the way for green, healthy cities in what is now one of the most polluted countries”, continued Dr Reddy. “Currently, however, pollution levels in the city are harmful to health, and a threat especially to children in the city.”

“As a Pediatric Pulmonologist, I consult children with asthma and allergic rhinitis on a daily basis. Many of these children have flare-ups of asthma when exposed to indoor and outdoor air pollution. I took up the cause of clean air in Bengaluru city to ensure that our children are protected from the effects of air pollution”, he added.

“This report helps us to understand the air quality during school opening and closing hours. Schools now have some data which can be useful in planning the school timings”, said leading educationist Dr Tristha Ramamurthy, Founder, Ekya Schools. “Simple measures like restriction of heavy traffic in school zones especially during school hours will help reduce students’ exposure to PM. We educators must also open dialogues with our parents and children on the health effects of air pollution. [4]”

“Improving air quality, both locally and globally, is key to sustainable development and to advancing ‘health for all’”, said Dr Linda Arnold, Director, IPA LEAD: Child Health Emerging Leaders Program & Associate Professor of Pediatrics and Emergency Medicine, Yale School of Medicine, who contributed to the report.

“Children are especially vulnerable to the adverse health effects of air pollution, but have no control over environments where they live, learn and play. We have a duty to protect children from airborne toxins, because they can’t protect themselves. Doing so requires political will, a multi-sector commitment to improving air quality, and sustained collaboration towards comprehensive solutions. It also requires better monitoring of levels and sources of air pollution, to inform efforts to minimize children’s exposure”, she added.

Protecting Bengaluru’s Children: Time To Act For Clean Air Around Schools calls for Indian policy makers on local and regional level to prioritise air quality, particularly in and around schools where its most vulnerable citizens spend a large part of their days. Locally and in the short term, this includes restricting traffic around school areas and possibly even closing school roads, to ensure a reduction in pollution levels. In the long term it must also mean investments in clean, sustainable modes of transport, including safe cycling lanes, electric buses and cars and the restriction of any industrial and construction activity close to schools.

The report can be downloaded here.

According to this 2002 study, the prevalence of asthma in people under the age of 18 in Bengaluru has increased from 9% in 1979 to 29.5% in 1999 – in other words, nearly 30% of children have developed asthma. Similarly, allergic rhinitis has increased from 22.5% in 1994 to 40% in the period studied. As part of that study, a survey in 12 schools with 6550 children showed higher asthma rates for children in schools in high traffic areas (19.34% compared to 11.15% in low traffic areas), and even higher rates in areas with both heavy traffic and a low socioeconomic status.

“Allergic airway diseases are a major global epidemic, causing a tremendous psycho-socio-economic health care burden to society”, says the author of the 2002 study, Professor H Paramesh, Pediatric Pulmonologist and Environmentalist and Visiting Professor Divecha Center for Climate Change, Indian Institute of Science, Bengaluru. “The main factors for this include losing our threshold of protection, a change in our food habits,a western lifestyle of living with poor cross ventilation and little sunlight, and higher exposure to outdoor and indoor air pollution. It is time to act to clean up the air that we breathe”.

26% Bangalore Children have Asthma – Times of India, May 12, 2012
https://timesofindia.indiatimes.com/city/bengaluru/25-Bangalore-children-have-asthma/articleshow/12945868.cms