Izkia Siches Pastén is a Chilean surgeon physician. Now on her second mandate, she is the first woman and the youngest president of the Chilean Medical College, Chile’s largest trade association of doctors and physicians, which she has been leading since 2017. She is also an advocate for gender equality in the healthcare system. GCHA welcomed the Medical College of Chile as a member of the Alliance and met Dr Siches to discuss climate action priorities for health professionals. 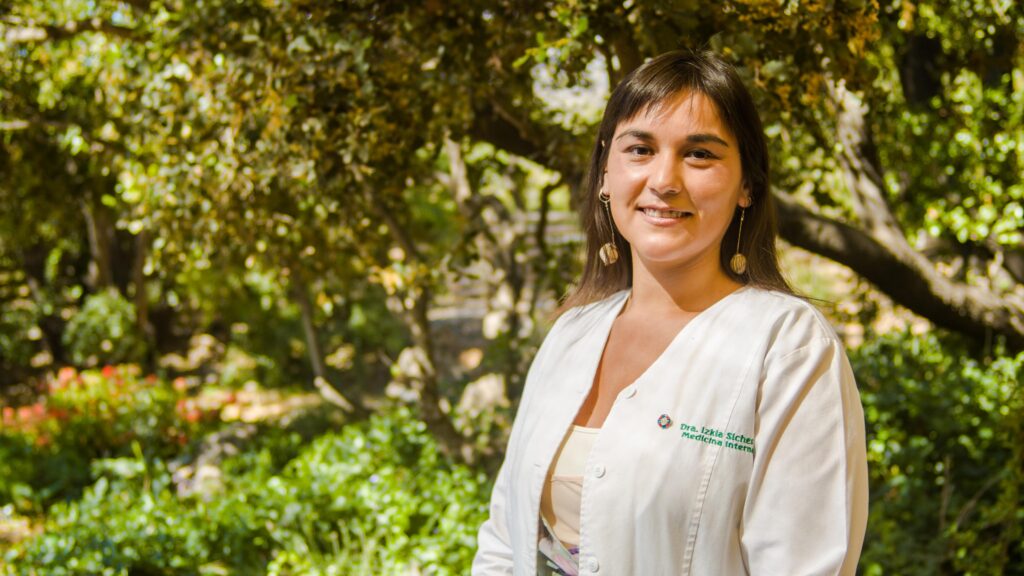 Social problems have always concerned me. Before studying medicine in the University of Chile, I was already aware of how structural social determinants impacted our inequitable country. I was born in the northernmost part of Chile, where communities are affected by environmental contaminants, such as arsenic and lead, produced by mining.

That is why, working as a surgeon, I have always paid attention to environmental health, especially public policies aimed at reducing harm for large populations. When my team won the presidency of the Medical College, we found an Environment department that was already quite distinctive and very active and we continued promoting the work carried out in this area. Our College is very sensitive to environmental issues, and we join with a lot of enthusiasm initiatives that try to attract the attention of leaders in Chile and worldwide.

Globally speaking, countries’ low ambition has an impact on the slow pace at which we are addressing climate change mitigation. In Chile, we are working to strengthen the involvement of our government to carry out concrete and ambitious actions to contain climate change so that this imbalance does not threaten life, something that all governments in Latin American countries and worldwide can do.

The pandemic took center stage and focused everybody’s attention at a crucial point for climate change, and so we missed the momentum, but it can also help us look back at the challenges we face as a planet. I hope that our country can also adhere to this.

At a national level, although Chile has set on a path, we have been encouraging a faster pace towards decarbonization and clean renewable energies. The impact that mining and refineries have, in particular on the health of our communities, has created a perception of populations left behind and forgotten. In Quintero and Puchuncaví, in Central Chile, there have been mass poisonings and the population had to face impacts more severe than those of climate change so far. People felt the governments failed to act and sacrificed them. It is unacceptable for a country that exhibits great macroeconomic indicators like Chile to fail in protecting its people in such circumstances, that require more decisive governmental action. We want to continue strengthening global strategies to prevent a blind focus on activities like mining: if countries think only about short-term gains without considering the environmental impacts of these economic activities, future generations will pay the price.

I participate in the work of an NGO called Medicos sin Marcas (Doctors without Brands) which, on the basis of evidence, ethics and scientific rigor, seeks to take a distance from the influence that the pharmaceutical industry can have on the prescriptions of specific drugs and brands. This influence modifies people’s perception of science, and affects the credibility that patients have with medical action. If doctors speak about one vaccine or another, but we are financed by the company producing that specific vaccine, our independence and credibility is at stake. The financial connections are often subtle and indirect, they can be a paid training or the financing of studies for pioneering doctors, which can have far-reaching consequences. It is necessary to establish a distance between health professionals and pharmaceuticals, but  it has not been a simple job.

Our country was going through a moment of extreme fragility regarding the leadership of the government. We knew that after the social outburst, many demonstrations were planned for 2020 in addition to electoral processes, a dire situation because of the risks related to f the pandemic. The Medical College understood that it could have a role in liaising with the people and explaining the importance of self-care to protect themselves from the virus, helping to overcome people’s distrust of both the authorities and the information received about the pandemic. That motivated us to participate much more actively. We summoned an expert panel and came up with proposals closer to people’s needs and concerns, including the delivery of economic support and ad-hoc protection measures, as the consequences of the lockdown hit harder certain categories of workers, high-contact jobs and women. Unfortunately, today the scenario is still extremely complex.

Today we are focused on medical action. That is where we have our greatest expertise and where our energies are invested. There is a lot of eagerness for change in Chile as well, the presidential candidates must be ready to truly transform the country and do it with a lot of technical rigor and professionalism.

Without a doubt, we are going to work to change the Chilean health system. We are planning to develop a health program for the next presidential candidates, which could be carried out across sectors. Once it becomes clear that we have built a team which is able to produce political proposals on issues of concern with the same seriousness and diligence that we deploy in health activities, we might think about getting involved.

We need global strategies that address climate impacts, it is an ethical imperative that medical communities embrace a broader perspective and also care about the health of our planet. We also need to explore how health systems could function so none of our citizens are left behind, paving the way towards more universal health systems. This is part of the transformation we envision for Chile.

And finally, especially in the context of a pandemic, we need to strengthen and improve international communication among organizations to face future health and climate challenges. What we have seen in this pandemic has left a bitter taste about the slow response, the lack of coordination in vaccines, the lack of clarity and revealed how some countries have attempted to weaken international health bodies that are more necessary than ever.

We are preparing a proposal centered on different relevant subjects as the right to health. As a Medical College, we believe that civil society groups have an important role to play when it comes to the organization of society, especially in a country that experiences transformation processes such as Chile. Also, we want to secure a space for the right to a healthy and ecologically balanced environment, a principle which is broadly supported within the medical community.

I am just a visible part of a great team that works tirelessly in different fields, such as the environment, which particularly interests me and my closest crew, but I believe that the main driver is the daily work of each of us.