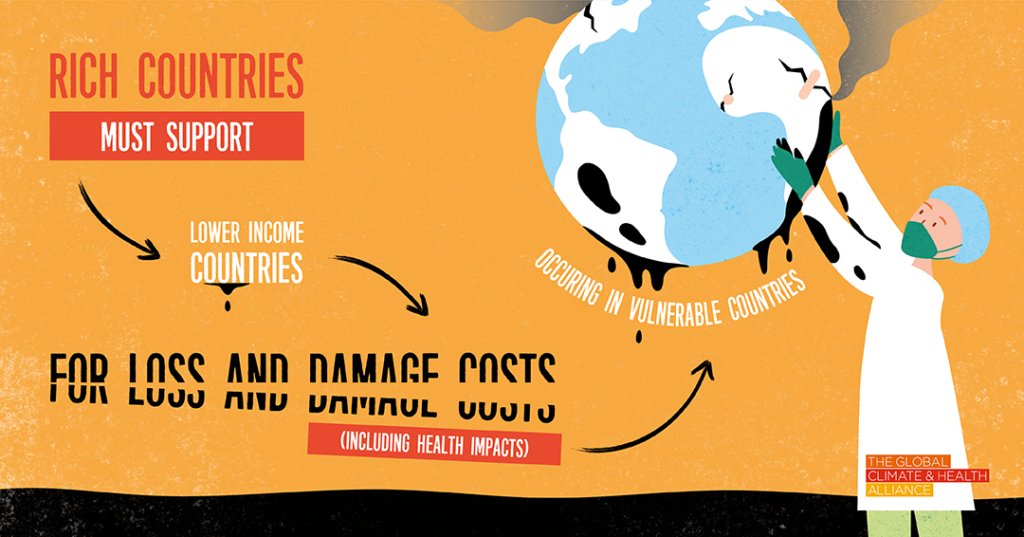 Sharm El-Sheikh, 16 November 2022:- As negotiations move to the ministerial level at COP27 Climate Summit in Egypt, the Global Climate and Health Alliance today reiterated its call for a governments to commit to establishing a Loss and Damage fund under the United Nations Framework Convention on Climate Change (UNFCCC).

Outside COP27’s negotiating halls, protesters have been chanting, “Pay up! Pay up! Pay up for loss and damage!” [1]. Inside, a negotiator for Guinea noted on November 10th that climate change has existential impacts throughout the African continent, with homes destroyed, populations displaced, and huge economic costs. While the G77 and China are keen to agree on the establishment of a fund at COP27, with the finer details to be confirmed by COP28, Canada, the EU and the US are pushing for a further two years to review the current context and assess the need and potential mechanisms for a dedicated loss and damage funding arrangement.

“A two-year delay to assess whether or not to create a dedicated Loss and Damage fund would be utterly unacceptable, given the urgency of the climate crisis, and the delays that lower income countries have already had to endure in receiving funds to combat climate impacts”, said Dr Jeni Miller, Executive Director of the Global Climate and Health Alliance, which brings together over 130 health organisations from around the world to tackle climate change and to protect and promote public health.

“Before COP27 closes, governments of developed/high-income countries must prioritise the establishment of a Loss and Damage fund to deliver finance to lower income countries that have been harmed by climate change, including for the damage to people’s health, and to health systems – there can be no further delay”, said Miller.

“Vulnerable and impacted countries desperately need these funds to compensate for the impacts on people’s health and wellbeing, as they respond to climate crises not of their making. Low income countries feeling the brunt of climate change cannot afford two years of discussion – they need guarantees of receiving the critical funds they desperately need,”added Miller.

Health losses and damages include damage to health facilities and supply chain infrastructure, the costs of treating people experiencing health impacts, and the costs to households and the national economy resulting from loss of labour productivity. These losses can be acute, such as deaths during floods or chronic, such as malnutrition arising from food scarcity, or the increased burden of vector-borne disease – linked to climate-driven changes in rainfall and temperature.

“Around the world health workers are seeing the human face of loss and damage”, said Jen Kuhl, Networks and Engagement Lead for the Global Climate and Health Alliance. “Malaria is being reported in the highlands of Uganda, where it was previously unseen. Recent floods in Pakistan destroyed health centres and homes, and displaced millions of people including thousands of pregnant women who have been forced to give birth in unsafe conditions.”

“Vulnerable nations have been calling for increased recognition of losses and damages for years,” added Kuhl. “As extreme weather events ramp up in frequency and intensity, people should not have to wait for international donors to mobilize every time there is a climate disaster. Meanwhile slower moving impacts such as droughts that impact agriculture and thus exacerbate hunger are a stark reality in many developing regions. Developed countries must urgently commit to implementing a Loss and Damage fund – there is no time to waste”, said Kuhl.

“We’re still not seeing any convincing progress with regard to comprehensive and accountable mechanisms to deliver the level and type of funding required”, said Jess Beagley, Policy Lead for the Global Climate and Health Alliance.“While New Zealand announced funding for loss and damage, by reallocating funding from its commitment for mitigation and adaptation finance, Germany and G7 countries have proposed an insurance structure, the Global Shield. None of this is good enough”, added Beagley.

“Funding for loss and damage must come as new and additional, on top of already existing climate finance for mitigation and adaptation and wider development assistance. Reallocating funding away from mitigation and adaptation to loss and damage only makes subsequent losses and damage more inevitable. Insurance-based mechanisms are insufficient – mounting climate impacts mean that the most vulnerable regions may simply not be considered insurable, and it’s unclear how insurance would address slow-onset events. Moreover, loss and damage finance must be delivered the form of grants, not loans that only serve to mire developing countries in years of foreign debt,” concluded Beagley.

About GCHA
The Global Climate and Health Alliance is the leading global convenor of health professional and health civil society organizations addressing climate change. We are united by a shared vision of an equitable, sustainable future, in which the health impacts of climate change are minimized, and the health co-benefits of climate change mitigation are maximised.