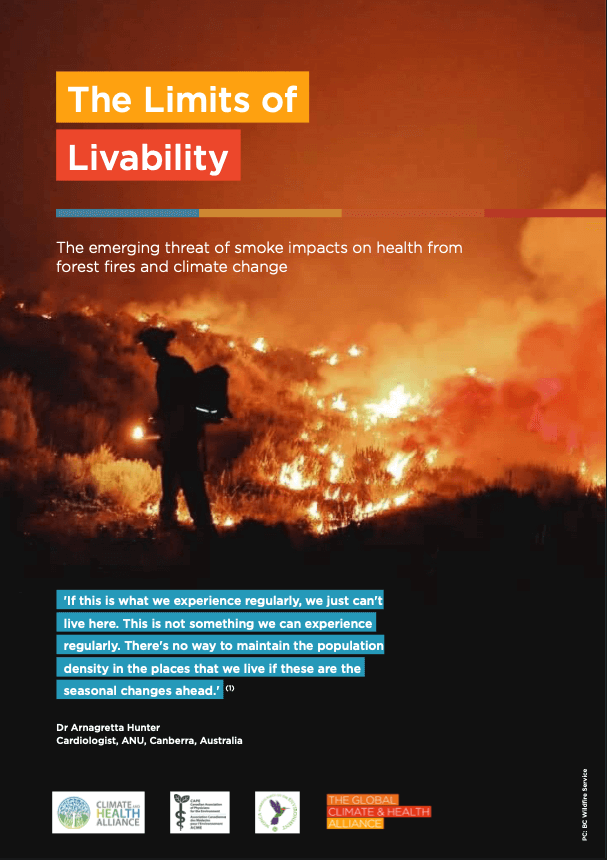 Worldwide, Public Health Systems Must be Prepared for Health Impacts of Fires Related to Climate Crisis

Canberra, London, Brasilia, Ottawa, 16/17 June 2021:- Bigger, more frequent forest and bush fires are having increased and not yet well-studied health impacts on people – including through longer and more frequent exposure to fire smoke by larger populations in distant cities – according to a report released today by the Global Climate and Health Alliance [1].

The report, The Limits of Livability – The emerging threat of smoke impacts on health from forest fires and climate change, with case studies from Australia, Brazil and Canada, warns that worldwide, governments must act to prepare public health systems for the impacts to the public from recurring air pollution episodes from fires caused by the climate crisis, deforestation practices, and poor land management.

“With climate warming driving increased wildfires around the world, what we’re seeing is that even after the last flames have been quenched and the TV cameras have departed, more and more people are at risk from the long-term consequences of forest and bush fires”, said Jeni Miller, Executive Director of the Global Climate and Health Alliance.

“Governments whose citizens are becoming increasingly exposed to severe health risks from air pollution from forest fire and bushfire smoke, not just in Australia, Brazil and Canada, but around the world, must prepare both their communities and health systems in order to to protect the most vulnerable, including those with respiratory conditions, children, and the elderly, who are disproportionately impacted from air pollution”, she continued.

“Australia, Brazil and Canada all had major fires in the last few years that captured global attention; however, wildfires, as well as fires deliberately started as part of deforestation, are also happening in many other countries around the world, including recent fires in Bolivia, Paraguay, Siberia, the western United States, and Indonesia.”

“What The Limits of Livability report shows us is that climate change, climate impacts and health are intertwined, and that policymakers must put health concerns front and centre when creating policies for dealing with climate change – including their national commitments under the Paris Agreement, the Nationally Determined Commitments (NDCs).”

“The implementation of both systematic monitoring and reduction of air pollution from forest fires must go hand-in-hand with reducing the causes of forest fires and an improved public health response. Ultimately global leaders, including those in the countries experiencing the worst forest and bush fires, must step up and limit the warming of the planet through rapid climate action”, concluded Miller.

“The devastating impact of the recent forest fires in Australia, the Amazon and Canada is not just down to the flames but also to the smoke which persisted for weeks and months, resulting in events that were outside of people’s lived experience”, said the report’s lead author, Dr. Frances MacGuire, Consultant with the Global Climate and Health Alliance.

“The short term health effects of forest smoke are now well documented but the long term effects of extended exposure are unknown. It is clear that there are significant research gaps in understanding the full health impacts of smoke from increased wildfire risk in a warming world, and on primary and secondary health services”, continued MacGuire

The report can be downloaded from the Global Climate and Health Alliance website here: https://climateandhealthalliance.org/the-limits-of-livability/

Limits of Livability – The emerging threat of smoke impacts on health from forest fires and climate change also examines the specific impacts of fires in three countries, Brazil, Australia and Canada:

In 2019, extensive forest fires in the Amazon sparked international reaction and widespread concern about the destruction of the Earth’s largest and most biodiverse rainforest.

Forest fires in the Amazon are largely deliberate, set intentionally as part of land clearing for ranching and agriculture. They contribute to climate change by damaging this globally important carbon store and sink. In the Amazon basin, 10 million live in areas of poor air quality. Exposure to forest fire smoke has been linked to increased emergency room visits, with symptoms including difficulty breathing, fever and chest pain; and long term exposure has been linked to increased vulnerability to the most serious effects of COVID-19. This recurrent, long-term exposure to forest fire smoke could be stopped immediately with a moratorium on deforestation and fires for land clearing, along with strong supervision to ensure implementation.

“All health professionals should be trained to understand the damage caused by air pollution, and the worsening health toll from climate change. In Brazil, we cannot be passive about the destruction from laws that harm nature and cause diseases and death.”

In 2019-2020, Australia endured the worst wildfire season in recorded history. These bushfires burned for 19 weeks, with 33 lives lost, over 2,000 homes destroyed, and an estimated three billion animals killed or misplaced. 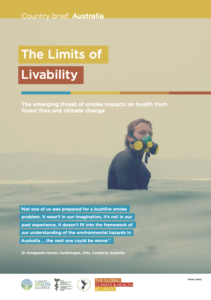 Air quality was ten times hazardous levels in Melbourne, Canberra and Sydney, with 80% of the population of Australia exposed to poor air quality. The increasing severity of Australian bushfires has been driven by climate change, along with land management practices. Indigenous fire management approaches could inform more effective approaches to managing the landscape, while more research, monitoring, and disaster response preparation are needed to better prepare and protect people and health systems from increased fire threat. Australia must also substantially strengthen its policies to mitigate climate change, to address the significant role that global warming plays in bushfires.

“Climate change contributed to the worst bushfires in recorded history in our country, and exposed millions of Australians to hazardous air pollution for months. We must recognize that climate change is a health emergency, and respond accordingly. Australia’s climate policies are far from aligned with the scientific evidence, and the health of Australians is suffering. Prime Minister Scott Morrison must recognize the urgency of the health and environmental emergency, and commit to rapid, ambitious action on climate change.”

Learning from Indigenous communities in Australia

The knowledge and skills that Indigenous communities hold could help develop more sustainable approaches to forest management in a warmer world. When fire is used in carefully controlled ways by Indigenous communities, like the “cultural burns” used in forested areas to suppress undergrowth and discourage big fires, it encourages new plant growth and attracts wildlife and bush food. The 2020 Royal Commission included key recommendations about the use of cultural burns, namely the sharing of knowledge and understanding about cultural burns and further investigation into how cultural burning could be used to improve forest and fire management in Australia.

In Canada bigger, more intense fires are driven by both climate change and poor forest management. 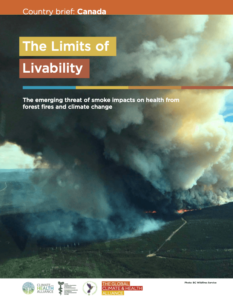 Polar regions are projected to warm faster due to climate change than areas towards the equator. Located near the Arctic, Canada is warming faster than many other parts of the world. Under the IPCC scenario where greenhouse emissions continue at a mid-range, it is projected that wildfires will increase in Canada by 75% by 2100.20 In the period 1980-2017, 448,444 Canadians were evacuated due to wildfires. Half of these evacuations took place in the last decade.

“In the summer of 2014, two and a half months of wildfire smoke resulted in double the number of asthma visits to the ER where I work. While I was writing up our study, a hospital in Alberta had to evacuate in a matter of hours due to an epic fire. Health authorities need to revamp ventilation systems in hospitals to cope with intense smoke and make sure evacuation plans are clear to keep patients safe during the fires we must now adapt to. And decision-makers must eliminate fossil fuel subsidies and support emergent drops in greenhouse gas emissions to reduce the intensity of the fires our children will inherit.”

“We now have an opportunity to include a systematic review of current research in the IPCC’s Sixth Assessment Report, due in 2022, which would aid in advising governments on this emerging climate and health issue. Health services in vulnerable countries must plan for longer and more intense fire and smoke events, including heat and smoke proofing of new hospital buildings and ensuring supply chain flexibility to match increased demand for treatments such as asthma inhalers. Indigenous forest management techniques provide an essential and important part of the response to better forest management which reduces fire risks while protecting human rights”, concluded MacGuire.

The Limits of Livability – The emerging threat of smoke impacts on health from forest fires and climate change highlights that:

The Limits of Livability – The emerging threat of smoke impacts on health from forest fires and climate change can be downloaded from: https://climateandhealthalliance.org/the-limits-of-livability/

Notes:
[1] The Limits of Livability – The emerging threat of smoke impacts on health from forest fires and climate change can be downloaded from: https://climateandhealthalliance.org/the-limits-of-livability/

About:
The Global Climate and Health Alliance is the leading global convenor of health professional and health civil society organizations addressing climate change. We are a consortium of health organisations from around the world united by a shared vision of an equitable, sustainable future, in which the health impacts of climate change are minimized, and the health co-benefits of climate change mitigation are maximised.