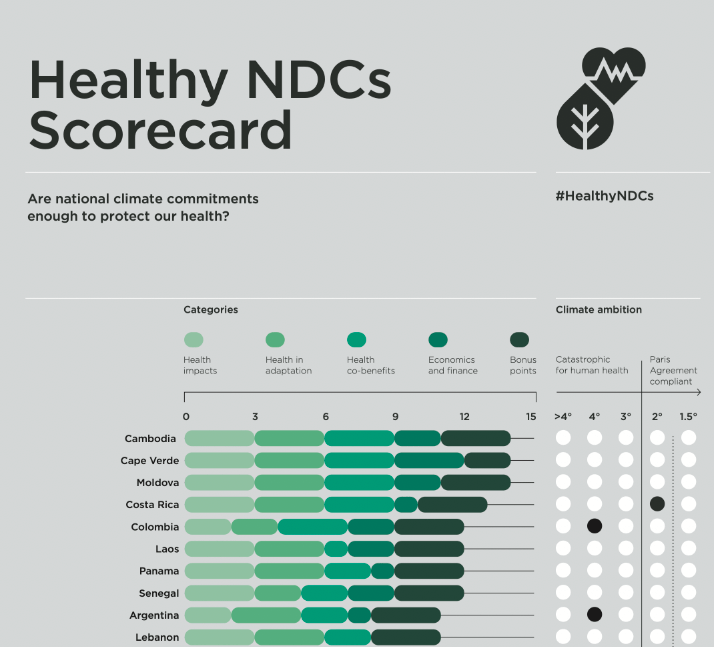 21 September 2021:- Despite UN Secretary General António Guterres’ stark warning that the recent IPCC’s Climate Report signals “code red for humanity”, world leaders are not yet prioritising people’s health in the face of a warming climate or doing enough to incorporate health into climate commitments ahead of COP26, according to the second edition of the “Healthy NDCs Scorecard” released today by the Global Climate and Health Alliance (GCHA) [1,2,3].

The “Healthy NDCs Scorecard”, which ranks progress of countries towards the inclusion of health within national climate commitments (Nationally Determined Contributions – NDCs) ahead of November’s COP26 climate summit in Glasgow, ranked three middle income countries, Cambodia, Moldova and Cabo Verde as joint leaders for their consideration of health across five categories [4]. 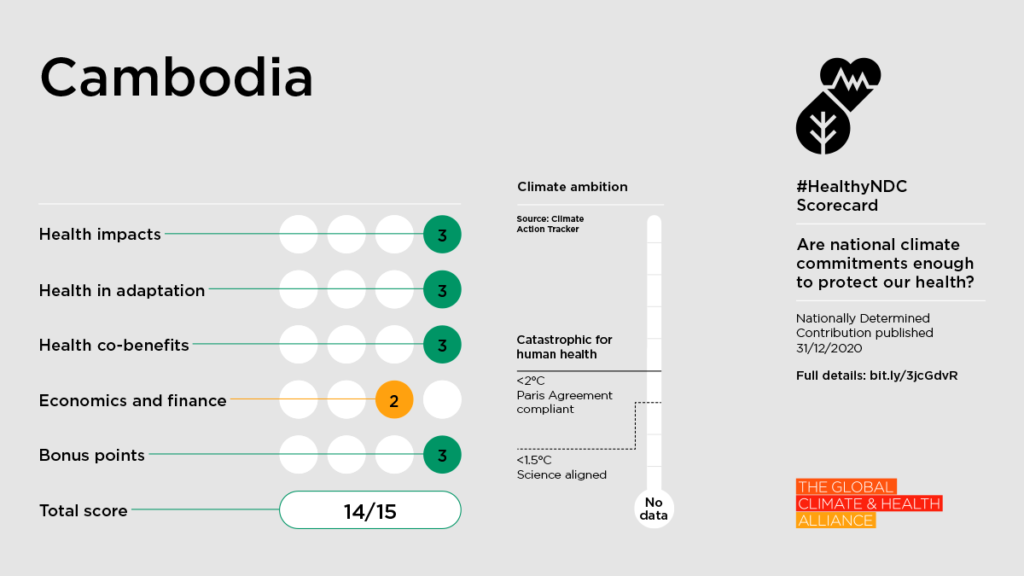 In a follow up to the first round of scorecards released by GCHA in July 2021, Cambodia, Moldova and Cabo Verde each secured 14 of 15 available points, followed by Costa Rica with 13 points. At the other end of the scale, North Korea and Vanuatu join Australia, New Zealand, Iceland, Norway and Brazil with a score of zero. In the first round, the EU, representing 27 member states, registered just one point, while the US scored six, and the UK seven out of a possible fifteen. More details here.

“Since the release of the Healthy NDCs Scorecard’s first edition two months ago, the global impacts of climate change on people’s lives have amplified – through wildfires and floods on an almost daily basis – but we have yet to see any tangible reaction from governments of many high emitting countries to address health impacts”, said Jeni Miller, Executive Director of the Global Climate and Health Alliance. “Meanwhile, smaller countries bearing the brunt of climate impacts are taking action in the form of their climate commitments to protect their citizens – demonstrating a clear understanding of the need to protect people’s health”.

“Ahead of COP26, this round of Healthy NDCs Scorecards drives home the lesson that not only is far greater collective political ambition required at a national and global level, but also that no country will remain insulated from climate impacts”, said Miller. “​​With COP26 fast approaching, governments must make people’s health the keystone of their climate policy, by making and meeting commitments to dramatically cut GHGs and by building health and equity into national climate mitigation, adaptation and financing.”

“High-income countries must finally deliver the USD $100bn promised annually to low- and middle income countries to support them in their transition to more sustainable economies. This financial support is crucial for enabling all countries to play their part in bringing the world closer to a low emissions future, and to build resilience that will yield benefits for people everywhere” [7], continued Miller.The highest emitting countries included in this round of analysis are Indonesia and Canada, together contributing 5% of global greenhouse gas (GHG) emissions, and scoring 8 and 7 points respectively, while analysis by Climate Action Tracker indicates that both countries have failed to align their emissions reductions targets – both are currently in line with a 4C rise [5]. South Africa is responsible for more than 1% of global GHG emissions, but the climate ambition described in its draft NDC also falls short of the level needed, with further room for improvement in its health score of 7 [6]. 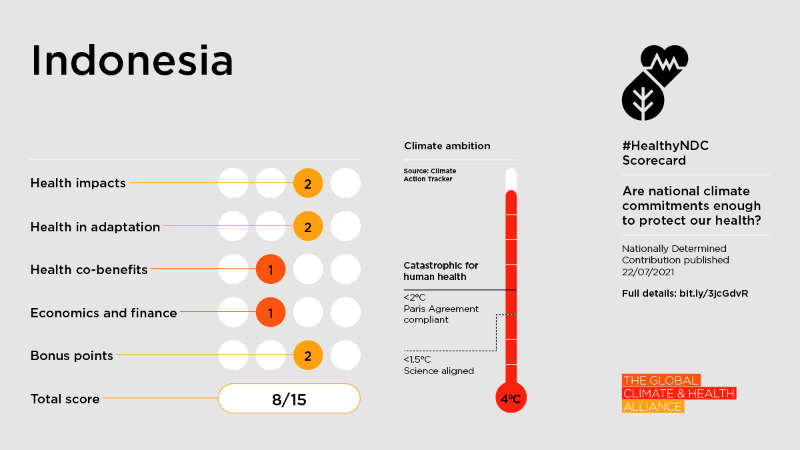 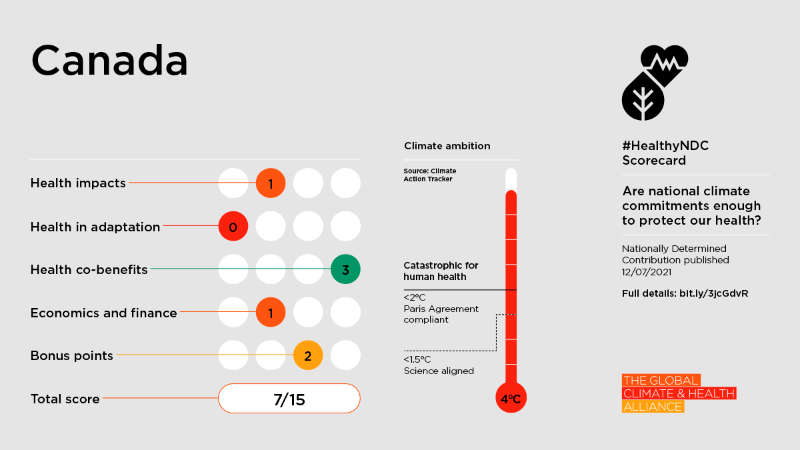 “From hundreds of heat-related deaths in Vancouver during the recent heat dome, to the tragic destruction of the town of Lytton by fire, the summer of 2021 has made clear that health and health systems impacts from climate change are here and are severe”, said Dr Courtney Howard, Emergency Physician, Yellowknife, Canada, former president of Canadian Association of Physicians for the Environment and Global Climate, and Health Alliance Board Member.

“The scorecard shows that Canada is only starting to connect the dots between climate change and health. As we move through the federal election and into the post-election period, it is imperative that decision-makers prioritize a national adaptation plan with health at its center. We must also shift fossil fuel subsidies to drive the emergent reduction of greenhouse gas emissions, prioritizing programs that also save lives through greener cities, more active transport, plant-rich diets, and low-pollution electricity and transport”, concluded Howard. 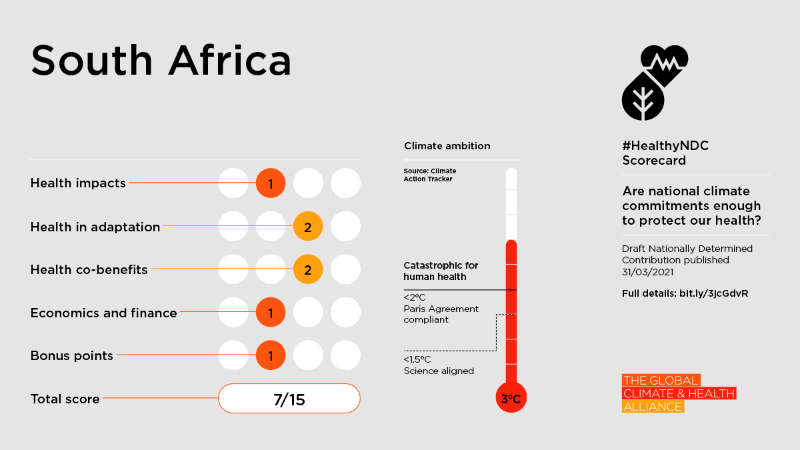 “South Africa’s draft NDC recognises the right to a healthy environment but fails to adequately consider health in a country and region so vulnerable to the health impacts of climate change”, said James Irlam, Convener: Climate, Energy and Health (CEH) Special Interest Group, Public Health Association of South Africa (PHASA). “The draft NDC is in line with a 3 degrees centigrade rise in global temperature, which will be catastrophic for our health, environment, and economy.”

“We therefore call on the South African government to align its national mitigation target with the 1.5 to 2 degrees of the 2015 Paris Agreement. We also call for clarity about what South Africa will commit its own resources to, and what will depend on international financing.

The health of our people depends on strong climate action now”, added Irlam.

The latest tranche of NDCs included in the scorecard brings the total now analysed by the Global Climate and Health Alliance to 67, covering 93 countries (including the EU 27) – representing under half of global emissions.

“This second round of Healthy NDC Scorecards re-confirms that countries that score highest usually have limited resources and are already experiencing the most severe impacts of climate change”, said Jess Beagley, Policy Analyst for the Global Climate and Health Alliance. “But it’s not enough for one small group of countries to lead – the countries that are the greatest emitters and have the largest populations have a moral responsibility to place health front and centre and act to protect the health both of their citizens, and people all over the world”.

Still more NDCs have been submitted while the latest analysis was ongoing, with 116 countries now having submitted their latest plans for addressing climate change. Among the countries yet to submit are China and India, which together represent a third of the world’s population and produce 30.8% of global emissions [8].

“In July, Climate and Energy Ministers of G20 countries reiterated both the scale and the necessity of action to pursue limiting global temperature rise to well below 2C and ideally 1.5C, and confirmed their intention to submit NDCs in advance of COP26”, said Beagley [9].

“Yet China and India, home to two of the world’s largest populations – have yet to deliver. India’s first NDC was one of the few to be aligned with 2C and also included health considerations – such leadership is needed now more than ever. Time until COP26 is running out, we’re running out of time to take action to limit the worst impacts of climate change.”

The NDCs of Cambodia, Cape Verde and Moldova demonstrate the inextricable links between health and climate change. Notably, Cambodia’s NDC includes appendices which detail financial costs and returns of mitigation and adaptation measures, with health impacts among those considered. These appendices also detail which actions can unconditionally be completed using existing national resources, and which are conditional on financing from donor countries [10].

Cape Verde’s NDC includes health from the very outset, with a 2025 commitment to build a monitoring system for tracing climate change related risk, and to build health and integrate climate change resilience targets into the national One Health policy framework as one of its flagship contributions [11]. Meanwhile, Moldova seeks to undertake integrated assessments of the environmental, economic and health impacts of climate change, underscoring the interdependence of these development priorities for all countries [12].

In addition to countries’ “health score” out of 15, the GCHA scorecard also presents data on climate ambition where available from Climate Action Tracker; highlighting the level of warming in line with the emissions reductions target of a country. However, the level of commitment by Cambodia, Cape Verde and Moldova to reducing greenhouse gas (GHG) emissions, which is essential to limiting global temperature rise and therefore to protecting health, has not yet been evaluated. It is therefore not possible to validate whether Cambodia, Cape Verde and Moldova’s level of climate ambition also matches their apparent commitment to protecting health [13].

On September 15, Climate Action Tracker announced that updating 2030 targets for climate action “has stalled since May”, with no major emitting countries “putting forward stronger climate targets, and the 2030 emissions gap has barely changed”.

Only one country – The Gambia – is rated by Climate Action Tracker as having overall climate action that is consistent with the Paris Agreement 1.5˚C warming limit. [14]

“The challenges of global health, environmental sustainability, economic development, and social equity should not be regarded as separate issues”, said Miller. “Countries which have not yet submitted NDCs in advance of COP26 must urgently do so and prioritise both planet and people in the process. For countries which have submitted NDCs which fail to exhibit the level of commitment so desperately needed, there is still an opportunity to do more.”

“What the highest scoring countries clearly recognize is that by integrating these factors, they can steer their countries towards better health in the near term, and a sustainable future long term, making efficient use of public money and securing a planet that is able to continue supporting the human race. But high scoring commitments without matching action are not enough. We celebrate countries which have prioritised health in their NDC. And now the world watches to ensure that these promises will be delivered”.

The Global Climate and Health Alliance is calling on governments to ensure that national climate action commitments include:

The countries added in the second round are:

Nationally Determined Contributions (NDCs) are national commitments for climate change response, including policies and measures to achieve the global targets set out in the 2015 Paris Agreement. NDCs require regularly updating, with increasingly ambitious targets. The NDCs submitted in the lead up to COP26 will define the course of national climate action until updated NDCs submitted in 2025 come into force.

About the Global Climate and Health Alliance

The Global Climate and Health Alliance is the leading global convenor of health professional and health civil society organizations addressing climate change. We are a consortium of health organisations from around the world united by a shared vision of an equitable, sustainable future, in which the health impacts of climate change are minimized, and the health co-benefits of climate change mitigation are maximised.