As the findings of the Intergovernmental Panel on Climate Change, and this recent report by the Global Climate and Health Alliance show, Australia is in no way immune to the health impacts of climate change.

One such impact can be seen with the increasing risk of skin cancer. Australia already has the highest rate of skin cancer in the world – astonishingly, 2/3 of all Australians will have been diagnosed with some form of skin cancer by the time they are 70 – and the incidence is expected to continually rise in correlation with rising ambient temperatures.

Skin cancers (including both melanomas and non-melanomas) result from skin damage by ultraviolet radiation (UVR), which accounts for at least 95% of all skin cancers in Australia. Australia experiences high levels of UVR, resulting from the reduction in their ozone layer since the 1970s. The stratospheric ozone layer absorbs the biologically damaging wavelengths of ultraviolet (UV) rays but in the 1970s, Australia’s ozone layer was severely thinned as a consequence of heavy use of ozone-depleting, substances such as chloroflurocarbons (CFCs) and hydro-chloroflurocarbons (HCFCs).

Despite strict control on these substances after the passing of the 1987 Montreal Protocol, Australia’s ozone still has a long road to recovery to reach its original levels. Full recovery of the ozone layer is not expected until at least the end of this century, if not well in to the next one.

Ozone depletion results in people being exposed to greater levels of skin damage. A study by van der Leun and colleagues shows that increasing temperature from climate change corresponds with an increase in UV radiation levels and so higher rates of skin cancer. The WHO has identified multiple health effects of increasing exposure to UV radiation, including malignant melanoma and non-melanocytic skin cancer as well as chronic sun damage.

With increasing ambient temperatures induced by climate change, skin cancer risk is compounded by changing behaviours, such as more time outdoors (though at higher-end warming, people could also end up spending less time outdoors, at least in summer, as temperatures ris above the threshold safe for outdoors activity).

Makin notes that current sun protective behaviours are not enough to address the increasing levels of UV rays therefore, scaling up of skin cancer campaigns, such as Sun Smart, are vital to address the impending increase in skin cancer rates and ultimately the health of all in Australia.

Skin cancer is just one illustration of why the negative health effects of climate change are too clear to ignore.

Joshua O’Reilly is a second year medical student at James Cook University in Townsville, Australia. He is also currently studying a Master of International Public Health, and a Master of Humanitarian Assistance. Before moving to Australia, he lived in Hong Kong for 21years. He has broad interests in global health including HIV/AIDS, refugee health and humanitarian crises, as well climate change and health. 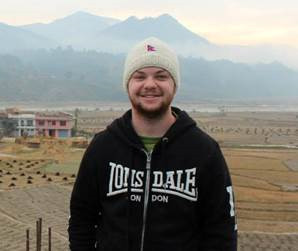